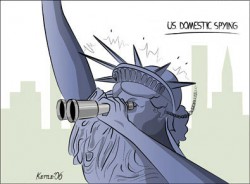 PLEASE DONATE $10 to BRING YOU TTTHERE!

Does any one of us know precisely what is and what is not guaranteed by the Constitution by way of individual or privacy or free assembly, free press or free speech? Are such freedoms once assumed so easily limited by the laws and rules Congress passes and the Administration invokes. In other words – is our right to privacy threatened by our obsession with security?

Many advocates claim that government is illegally spying on us, threatening jail time and even physical injury if we speak out or peacefully and civilly disobey, tried for treason by turning to press freedoms to expose the government’s own obsession secrecy – its insistence that all things sensitive should be kept from public scrutiny, thus over-classified. Facts support this claim.

No one in power wants the eyes of their constituents prying into their business, even in what purports to a democracy that exists at the will and pleasure of those constituents – the voters, the citizens. This sense of entitlement to secrecy extends to all levels of government and the transactions they’d rather you knew nothing about, including wiretapping Americans, possibly you, and Internet spying. It won’t be long before those same powers come a-calling to ask you to keep them in power, insisting they’ve operated and behaved transparently and entirely in your interest, the public interest.

Well, we know better. The quest for secrecy in the halls of power has far more often than not been exposed for the damage it has done to the national and local good – not its exposure, and certainly not if the laws and constitutional provisions designed to rein in power have been thwarted to preserve it.

The increasingly accelerating imposition of secrecy, extreme prosecutions and punishments inflicted for shattering it, the extraordinarily expanding exercise of police powers to beat in skulls and arrest demonstrators and dissenters, the global hounding of leakers on charges of treason and the spying so-called national security agencies engage in the name of protecting us from faceless enemies, and not our freedoms when those freedoms mean the most, are emerging as the prime issues confronting our personal and electronic liberty in an age when the lines between the latter and the former so easily blur.

CAN WE STOP IT?

This week, we look at those questions at every level and try to get idea of whether or not this juggernaut can be brought to heel before even our most progressive policymakers have become irretrievably corrupted by their own hubris and the admonishments of the military and policy technocrats, not to mention the corporate media hounds that pretend to demand press freedoms for themselves but fail to call their governments to account for their anti-democratic ploddings.

TTT’s ANDY DRISCOLL and MICHELLE ALIMORADI talk with just three of the many local and national civil rights privacy and media justice activists immersed in this intensifying and alarming decline in Constitutional compliance.